Which Way the Wind Blows: Straw Polls and US Elections

Do these informal surveys have any benefit for modern elections? In the world of elections, groups often conduct surveys asking people what they think of issues or politicians. These questionnaires – including a type called straw polls – are used to get an idea of public opinion. What issues are important to Americans, and which political candidates would they support?

Straw polls are unofficial surveys or votes. They are often held during political meetings or other events where organizers want to get an idea of what participants think about certain issues. These may be used to find out which political candidates people would vote for in an election, or about their opinions on issues of the day. Informal votes have taken place over thousands of years of human history, with participants using their voices to vote. Nowadays, this is normally done with paper ballots. Some have less formal methods; county fairs might get voters to put a corn kernel into a jar marked with their preferred answer, for example.

Imagine you hold a piece of straw up the air to see which way the wind blows it. Some have suggested this is how “straw polls” got their name – because they give a general idea of which way popular opinion is going, but they are not totally accurate or scientific.

According to author G. Elliott Morris, the earliest straw polls in America were taken by voice at events like military musters or Fourth of July parades, where local leaders would ask members’ opinions about upcoming elections. This also gave newspapers a chance to report on the results, especially those that supported their favorite candidates. Newspapers soon began to conduct their own straw polls, asking their employees, readers, or passers-by on the street to vote. These surveys were not always accurate though, and over time, organizations began trying to make them more scientific.

Some polls – such as opinion polls – are scientific. They carefully collect information about respondents, such as age, gender, or political party membership. The pollsters use this information to analyze the results and create statistics. They try to make sure the statistics represent the American population.

Straw polls are not scientific – they usually don’t go out to a wide range of Americans. Since they are often conducted at events or meetings, the results only reflect the opinions of the people who would attend that event. These polls don’t normally collect extra information about the respondents. Even so, there are usually some rules over how the poll is held. For example, participants may only be allowed to vote once.

Of course, even “scientific polls” can be unreliable when it comes to predicting people’s true attitudes, or how they will eventually vote during an election.

A common way to conduct straw polls is to survey people who attend an event. Some recent examples asked participants about their opinions on the 2024 presidential election.

An organization called Turning Point USA recently held a Student Action Summit. They asked which Republican candidate attendees would vote for during the election. Over three-quarters said they would choose Donald Trump if he were running for president, with Florida Governor Ron DeSantis coming in second and the other options getting hardly any votes. Here are the results: 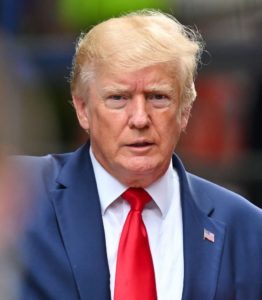 So, what do the poll results show? First, the summit was aimed at students and young people who support conservative political ideas. Among this type of person, Donald Trump is likely to be the most popular politician. It also shows that he is much more popular than the other options in the survey, with most of them getting less than 1% of the vote.

The students at the summit were also asked for their opinions on other issues – for example, 26.2% said they are confident the Republican Party can communicate well with a younger audience, while 73.8% said they are not.

Another recent straw poll was conducted at the Conservative Political Action Conference. This one also asked people who they would prefer to run for president on behalf of the Republican Party in 2024. Again, Trump was the most popular candidate, getting 69% of the vote. DeSantis was second with 24%, and Texas Senator Ted Cruz came in third with 2%. Fairgoers casts their votes in a straw poll about Democrat candidates at the Iowa State Fair.

Of course, not all straw polls take place at political meetings. The Iowa State Fair is a famous example. Iowa Secretary of State Paul Pate recently announced he will take a survey at the fair: “I’m inviting every fairgoer to participate in the State Fair Straw Poll,” said Secretary Pate in a press release. “It’s a fun way to prepare Iowans ahead of the 2022 general election to see which candidates they prefer.”

As you can probably see, there are pluses and minuses to conducting straw polls.

Considering both the advantages and disadvantages, do you think straw polls have a role to play in modern elections?