On Monday, August 10, President Donald Trump took his place at the podium to give a routine press conference, updating Americans on the Coronavirus and potential for a vaccine, as well as the country’s economy. However, it ended up anything but routine when Secret Service officers approached the commander in chief during his opening statement and escorted him out of the room.

Mr. Trump very calmly exited the room, leaving the audience, both in person and those watching the live report from home, worried. It is unusual for the Secret Service to interrupt a briefing and remove the president from the area. As it turns out, shots had been fired just outside the White House grounds, which prompted protective measures for the nation’s leader.

According to the Secret Service, 51-year-old Myron Berryman of Forestville, Maryland, approached one of the officers who was on guard at his post about a block from the White House and told the officer he had a weapon which he intended to use. “The suspect then turned around, ran aggressively towards the officer, and in a drawing motion, withdrew an object from his clothing,” the Secret Service explained in a statement. “He then crouched into a shooter’s stance as if about to fire a weapon.”

According to reports, the suspect was shot twice in the torso but has since been recovering in the hospital. Officials did not find a firearm on his person.

The president’s cool demeanor under fire spurred a question from reporters, asking if he’d been rattled to be removed for protection by the Secret Service. “Do I seem rattled?” he asked. “The world has always been a dangerous place. That’s not something that’s unique.”

It’s taken a while to make a decision, but Democratic presidential candidate Joe Biden has finally chosen his running mate, the person he would want to be his vice president. California Senator Kamala Harris has agreed to run on the ticket with Biden. Was this a good choice for the Democrats?

Biden had promised to choose a woman of color for his vice president, and so he has. Harris is Indian- and Jamaican-American and the daughter of immigrants. As a former prosecutor, Harris has a law background to bring to the table. Although she is a woman of color, she has a record of jailing large numbers black males, which could go against the presidential duo at this time when the Black Lives Matter movement is prompting police reform and hoping to defund the police across the nation.

One common concern of this election is that Mr. Biden will not be able to complete his four-year term if elected, due to medical reasons, especially since he is one of the oldest presidential candidates in history. If he has to step down, then Harris will become the commander in chief. That would make her the first female president of the United States.

Being stranded on a deserted island may seem like a dream with plenty of sun and surf. That is until food runs out, and the lack of other modern conveniences like running water takes its toll. Three men who suddenly found themselves on a small island without any signs of civilization, were only too happy when authorities spotted their huge SOS sign drawn in the sand and came to their rescue. 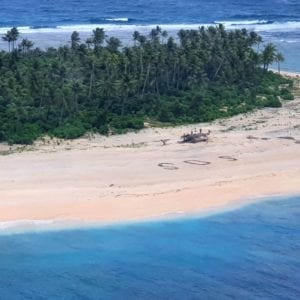 The sailors had been trying to travel 27 miles to the island Pulap atoll, but for some reason they sailed off course and didn’t have enough fuel to return. They left from Pulawat atoll in Micronesia in a 23-foot boat on July 30. They had been missing for about three days when their SOS distress signal was seen on Pikelot Island, a small uninhabited piece of land, by Australian and U.S. aircraft searchers.

Guam searchers asked for help from Australia to find the missing men. The HMAS Canberra, an Australian military ship, was returning after completing exercises in Hawaii. It took up the search and diverted to the area along with U.S. teams. The castaways were found nearly 118 miles from where they had originally departed. An Australian military helicopter landed on the beach to give them some much-needed food and water while they waited for a Micronesian patrol vessel to pick them up and return them home.

The Micronesia area has several small islands, and this isn’t the first time sailors have found themselves to be unexpected guests on one of them. In 2016, Linus and Sabina Jack were missing for about a week before being rescued. They used a flashlight and an SOS message written in the sand to get their distress signal out to search parties.