Climate change activist is honored in art – but not everyone agrees. The Swedish teen climate activist, Greta Thunberg, has made quite a name for herself as she tries to promote the idea of climate change around the world. Recently, she was honored with a mural of her image in San Francisco, California. The huge painting was placed on a building and has proven controversial – while some people admire Greta’s activism, she has just as many critics.

Thunberg became an almost overnight sensation after her anger was splashed across the media. Her famous phrase “How dare you!” was aimed at world leaders, who she does not think have acted enough to stop climate change. The accusation was heard around the world, and soon the 16-year-old found herself an international celebrity. Not long after, she was nominated for the prestigious Nobel Peace Prize Award.

The Argentinean artist Nino Cobre (real name Andres Pereoselli) is well known for his murals of famous faces. The recent painting, meant to honor Thunberg’s outspoken protests, prompted both praise and condemnation. Some commented that it was ironic for a painting created with aerosol cans to celebrate a climate activist. However, the artist and the sponsor, nonprofit organization One Atmosphere, said the paint used was water-based and environmentally friendly. 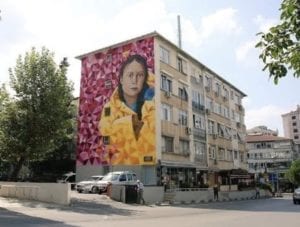 Those who dispute global warming argue Thunberg should not be celebrated when she has done nothing but display angst and fear. On the other side of the spectrum, she is lauded as a hero for standing up for her beliefs and giving the younger generation a stronger voice.

Climate change, global warming, and climate control are hotly debated. People either believe the planet is doomed to imminent destruction, or claim the issue is blown out of proportion. There is hardly any middle ground. So, it’s no wonder that Greta’s mural could elicit such controversy.

As for Greta herself, she has just left the U.S. and is sailing to Spain to attend the 25th United Nations Climate Conference.