Afghanistan Faces a ‘Tsunami of Hunger’ Under the Taliban

Western Leaders met with the Taliban in hopes of helping the Afghan people - but was it the right thing to do? The United States military left Afghanistan last summer, leaving the country ruled by the Taliban, an extreme Islamist group. Recently, the group joined Western leaders in Oslo, Norway. The meeting included officials from the United States, United Kingdom, and Germany. The main focus of the talks was the humanitarian crisis in Afghanistan, where a shortage of food has become a big problem.

The goal was to help western leaders and the Taliban work out their differences in hopes of helping the people of Afghanistan receive aid, food, water, and shelter. However, many human rights activists were outraged that world leaders would meet with the Taliban due to the group’s poor treatment of women and girls.

The United Nations (U.N.) recently asked the world for about $5 billion in aid for Afghanistan. This is the largest amount of money the U.N. has ever requested for a single country. It aims to prevent the “world’s most rapidly growing humanitarian crisis” from becoming worse.

Since the U.S. left, half a million Afghans lost their jobs. There is also a currency shortage, meaning a lack of physical coins and bills. The little food available in the country is too expensive for the people. According to the U.N., nearly 23 million Afghans face extreme hunger. That’s more than half the population. The winter months will only worsen the problem. Nine million people are at risk of famine, and 97% of the population are in poverty.

The United States recently pledged to send an additional $308 million in aid for Afghans, making a total of $780 million since October. Families and small organizations that send supplies, food, and assistance are finding it difficult to make sure their shipments reach the right people. 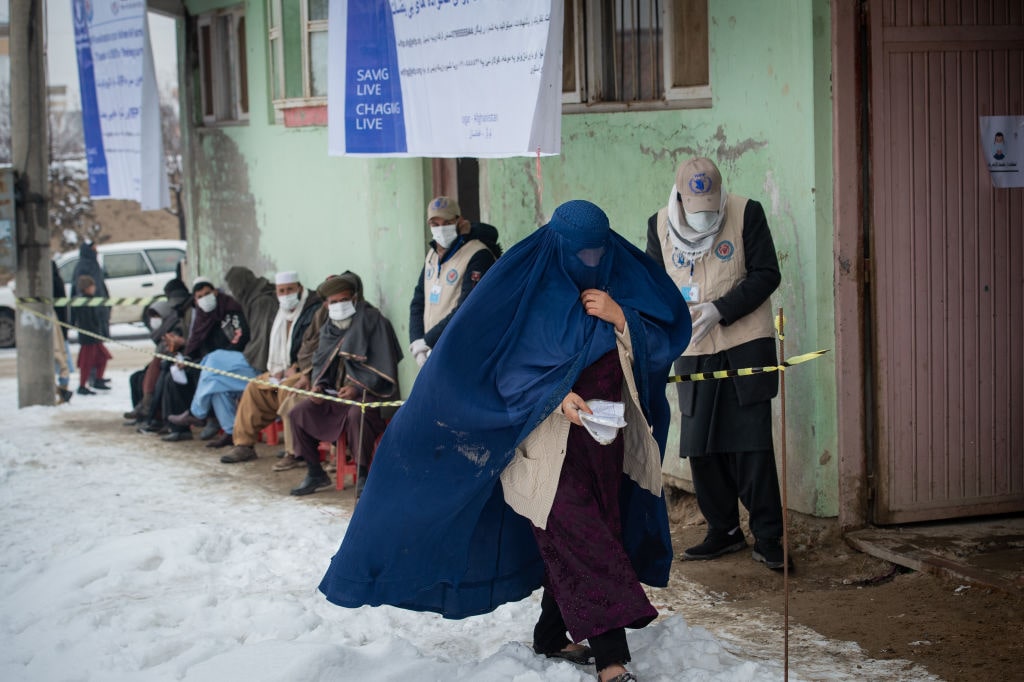 A woman going to female-only line as U.N. gives out food in Afghanistan (Photo by Scott Peterson/Getty Images)

Human rights are rights believed to belong to every person on the planet, regardless of race, gender, nationality, religion, age, or any other status. Some of these rights include freedom from slavery or abuse, freedom of expression and opinion, and the right to education. The Taliban has been heavily criticized for violating women’s human rights. They impose extreme Sharia rules for females. Women and young girls are told how to dress, where they can go, who they can spend time with, and whether they can be educated or hold a job. If they do not follow the strict laws, women and young girls are abused by the Taliban. However, this “new” version of the group promises to be different.

According to the Afghan Foreign Ministry spokesperson, the Taliban insists “there are absolutely no restrictions on any girls or women attending schools from primary to higher education.” He also claims the Taliban forces never “threaten women ever, and they have a lot of respect for women.” However, reports show that females have been stopped from going to school or work since the Taliban took over the country. So far, women have been restricted from returning to their jobs, forced to wear their hijabs when traveling in a taxi, and cannot travel on trips longer than 45 miles without a male relative accompanying them.

In Oslo, Afghan leaders claimed they would open schools for women and children in late March. The world will have to wait and see if they follow through on their promise.

A group of United Nations human rights experts say the Taliban government is trying to erase women and girls from public life. They suggest the government is punishing women into poverty and stopping them from making their own money. Women have taken to the streets to protest and, in response, have been threatened, beaten, and arrested.

Human rights advocates suggest world leaders shouldn’t deal with the Taliban, but others say Afghanistan needs help or the people may starve. What is the right answer?