Trump’s Work for Native Americans in 2019

Native Americans have often been ignored, politically, but not in 2019. The mentioned legislation includes compensation to the Spokane tribe, reauthorization of funding for Native language programs, and federal recognition of the Little Shell Tribe.

The recompense comes decades after the Grand Coulee Dam flooded 21,000 acres of Spokane lands. In 1940, the Colville – the other tribe whose land was flooded – were given $63,000 in compensation; in 1994, they were granted an additional $53 million, and since then have received annual payments ranging from $14 million to $22 million. The Spokane were given only $4,700 for the flooding of 40 miles of their land.

The new bill orders the Bonneville Power Administration, an American federal agency based in the state, to pay the Spokane tribe $6 million per year for ten years and then $8 million each year afterward. The only downside to the tribe is that they will no longer be able to claim a share of the hydropower revenues generated by the dam.

The Esther Martinez Native American Languages Preservation Act became law in 2006 but expired in 2012 and was not renewed. The new law will grant $13 million to smaller groups of Native American students starting next year and ending in 2024.

Representative Dusty Johnson (R-SD) said, “There are 175 Native languages spoken in this country today, and there are estimates that, 30 years from now, fewer than 20 will be spoken.”

The National Defense Authorization Act included federal recognition of the Little Shell Chippewa Tribe from Montana. Tribe members have felt like outcasts, not having land of their own and not being acknowledged by other tribes that have reservations.

Little Shell members have been campaigning for recognition since the late 1800s, after treaty negotiations fell through. With less than 5,000 members, the tribe has struggled to keep up the fight since many of its people have relocated. Although the legislation gives them only about one square mile of land for the reservation, it also provides access to programs such as Indian Health Services. 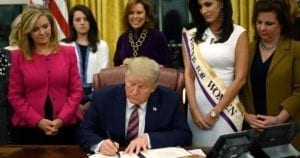 In November, the president signed an executive order that established Operation Lady Justice, an interagency task force. It will develop an aggressive, government-wide strategy to resolve the problem of missing and murdered women and girls in indigenous communities.

In October, the U.S. Department of Justice awarded more than $273 million in grants designed to improve public safety and combat violence against Native American women as well as to support youth programs.