The Statue of Liberty: A Symbol of American Freedom

A symbol of friendship between France and America. As the Civil War neared its end around 1865, Edouard de Laboulaye, a French historian, suggested that France should create a statue to celebrate America’s hard-won independence from England. The project was awarded to Frederic Auguste Bartholdi, a sculptor, and the goal was to complete the statue just in time for the centennial of the Declaration of Independence in 1876. The agreement was that the French would build the statue and the United States would construct the pedestal it would be placed upon. This, it was proposed, would stand as a symbol of friendship between France and America.

Bartholdi named his creation the “Statue of Liberty Enlightening the World.” It was not easy work. Alexandre-Gustave Eiffel (the designer of Paris’s Eiffel Tower) joined the team to create the skeleton of the statue while large copper sheets were hammered out to create the “skin” in a technique called repousse. The skeleton was made from iron pylon and steel, which was made so the skin around it could move more freely.

Meanwhile, in America, work began on the pedestal. It was constructed in the courtyard of Fort Wood, a fortress from the War of 1812 located on Bedloe’s Island. The statue was completed in 1885 and then taken apart and put into more than 200 crates to ship to New York. It took four months to put it back together and place it on the pedestal. President Grover Cleveland officially dedicated the Statue of Liberty on Oct. 28, 1886.

At the entrance to the statue’s pedestal is a plaque with the engraved sonnet by Emma Lazarus called “The New Colossus.” Lazarus wrote the piece in 1883 as part of a fundraising contest to help build the pedestal. Part of the sonnet includes the famous phrase: 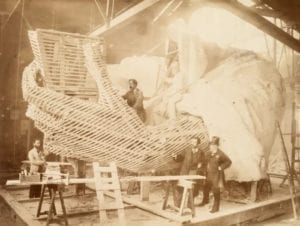 “Give me your tired, your poor

The wretched refuse of your teeming shore

Send these, the homeless, tempest-tost to me

I lift my lamp beside the golden door!”

In 1892, the U.S. opened a federal immigration station on Ellis Island. Between 1892 and 1954, about 12 million immigrants were processed there. Up until 1901, the statue’s torch was operated by the U.S. Lighthouse Board as a navigational aid for sailors. Then it became the U.S. War Department’s jurisdiction because Fort Wood was still operating as an army post. In 1924, it became a national monument, and it was placed under the care of the National Parks Service in 1933. In 1956, Bedloe’s Island was renamed to Liberty Island, and, in 1965, Ellis Island became part of the Statue of Liberty National Monument.