The past week has been full of anger, despair, frustration, and pain as people protested the death of George Floyd. The events focused on the issue of race, as Floyd was a black man and the officer who killed him was white.

Although George Floyd died in America, outrage at the injustice reached a global level. People everywhere are joining together to fight against racism and mistreatment by police.

While some have said the American policing system is doesn’t apply in other countries, that didn’t stop thousands of people from protesting around the world.

In London, protesters marched to the U.S. embassy. The city’s Metropolitan Police said they had arrested 23 people and that they were showing a presence across London to ensure social distancing guidelines were being met during the protests.

In Canada, most of the protests were peaceful and took place in Vancouver and Montreal. However, things got a little out of hand and the crowds were dispersed after objects were thrown at police officers.

In Rio de Janeiro, Brazil, crowds gathered to chant “I can’t breathe,” which Floyd said to the police while being pinned down on the street. Police dressed in riot gear broke up the crowd outside the state government palace.

In Auckland, New Zealand, 4,000 people marched in protest. They demonstrated in front of the U.S. consulate, kneeling and holding banners with “I can’t breathe,” “Black Lives Matter,” and “The real virus is racism” written on them.

Protests were seen in over 50 countries and on every continent except Antarctica. Most were in Europe, but a few were scattered around South America, the Pacific, Asia, and Africa.

Six months into the year and 2020 seems more like something from the movies than actual life on Earth. From the fires in Australia, locusts in Africa, the Coronavirus pandemic, murder hornets, and now an asteroid flying by our planet, it makes one wonder what’s next. At least, the asteroid passed by us at a safe distance over the weekend. 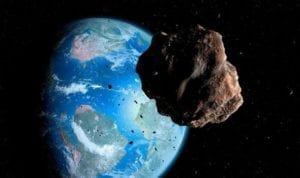 NASA’s Jet Propulsion Laboratory (JPL) named the space rock 2002 NN4. It was labeled “a potentially hazardous asteroid” because of how close it was going to pass by the Earth, but that was still more than 3.1 million miles away – about 13 times further than the moon. At an estimated diameter of 1,870 feet (the size of six football fields), 2002 NN4 passed by Earth at 11:20 p.m. Eastern time on Saturday, June 6.

After George Floyd was killed, riots broke out across the nation, causing millions of dollars in damage, lost businesses, and even lost lives. For the most part, the protesters were peaceful, demonstrating their anti-racism message – it was the looters and rioters afterward that caused most of the problems. At the center of the protests was Black Lives Matter, an activist group that campaigns for black rights. Washington D.C.’s mayor, Muriel Bowser, decided to show support in a big way. An area near the White House was renamed “Black Lives Matter Plaza,” and a mural with the words written in bright yellow paint covered a two-block area. The lettering was so large that a satellite, operated by the company Planet, caught the image. Apple Maps joined in by updating its satellite imagery to show the mural.

“As Washingtonians,” Mayor Bowser said, “we simply all want to be here together in peace to demonstrate that in America, you can peacefully assemble, you can bring grievances to your government, and you can demand change.”

Not everyone was happy with the new plaza name and mural, however. Black Lives Matter Global Network said it was a “distraction from real policy changes.” Others disapproved of the message for another reason, saying that Black Lives Matter was responsible for some of the violence.