The Story of the US Dollar

Where did the dollar come from? The United States dollar – equal to 100 cents – is the nation’s official currency. It is represented by the $ symbol. Also known as the greenback, the dollar is the most used currency in the world.

A Currency is Born

Soon after the Federal Reserve (the Fed) was created in 1913, the dollar’s future would change – for better and worse.

The good news for the dollar was that, following the Second World War, it became the top currency in the world. The bad news, according to critics of fiat money – currency backed by nothing – is that paper currency without gold would just keep losing value.

As Good as Gold

For much of the nation’s history, the US economy relied on a gold standard. This is when a currency is fixed in gold or silver and can be traded at any time for these metals.

In 1933, President Franklin Roosevelt signed an executive order that banned the ownership of gold coins, certificates, and bullion. Citizens were required to sell their gold to the central bank. A year later, Congress approved the Gold Reserve Act that not only outlawed private ownership of gold, but it also let President Roosevelt set the price of a troy ounce of gold to $35. This lowered the dollar’s value. 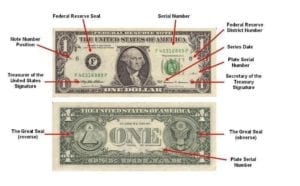 In 1971, President Richard Nixon ordered the Fed to stop honoring the greenback’s value in gold. Four years later, the White House announced that the US dollar would be taken off the gold standard.

The value of the dollar is now determined using supply and demand compared to other currencies in the foreign exchange market.

Will the US dollar lead international markets forever? All the trends suggest that governments and central banks are moving away from the dollar. At the same time, investors have been pouring into the dollar to flee from the great volatility happening worldwide. In the future, it might be the yuan, or it may be a cryptocurrency as the next dominant form of money.

But for now, the dollar is king.