Recently, American artist Norman Rockwell made the news – not for his renowned pictures of 20th-Century American life, but for having some of his artworks removed from the White House.

The display included four of Rockwell’s works, as part of a series called “So You Want to See the President.” This series depicts officials and other Americans waiting to meet with the president at the White House. It was reported that Rockwell’s black and white sketches were taken down because the owners asked to have the pictures returned to them. The artworks have reportedly been replaced with large photos of President Joe Biden.  The paintings had been on display on the White House walls since 1978, but they were originally from 1943, when Rockwell visited the White House.

Norman Rockwell was a celebrated artist in America and around the world. He was born in 1894 in New York City. At age 14, he left the public school system and enrolled in the Chase Art School and The National Academy of Design. He received a scholarship to the Art Students League, and at age 17, got his first paid job as a freelance illustrator for Conde Nast magazine. He landed his first major job at 18, illustrating Carl H. Claudy’s book, Tell Me Why: Stories about Mother Nature. When the United States joined World War II, the young artist tried to enlist in the US Navy. Instead, he was sent home for being eight pounds too light for his height of six feet. That night, he gorged himself on bananas, donuts, and a lot of liquids. The next day he passed the weight requirement and was given the role of military artist.

During World War II, Rockwell was inspired by President Franklin Delano Roosevelt’s speech “The Four Freedoms.” He started a series of paintings based on the speech. The series was completed in seven months and depicted Freedom From Want, The Freedom Of Speech, Freedom Of Worship, and Freedom From Fear.

The Saturday Evening Post and book publishers soon snapped up Rockwell’s artworks depicting everyday life in the United States. For 64 years, he painted and sketched covers of Boys Life magazine for the Boy Scouts of America and was the artist of book covers like Tom Sawyer and Huckleberry Finn. As a result, Norman Rockwell’s art became common in houses across America, and people enjoyed displaying the idealistic lifestyles seen on his magazine covers.

Later in his career, the artist painted portraits of presidents, including Dwight Eisenhower, John Kennedy, Lyndon Johnson, and Richard Nixon. He also addressed the struggle for civil rights in America. For example, a cover for Look magazine depicted Ruby Bridges, a young black girl flanked by white federal agents, as she walked into a traditionally white school in Louisiana – the newly desegregated William Frantz Elementary School. 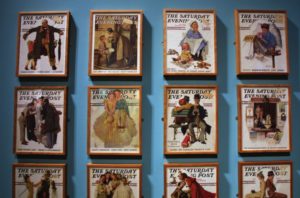 For his presence in art and life, Rockwell was bestowed with the United States of America’s highest civilian honor – the Presidential Medal of Freedom – by President Gerald Ford in 1977. He received the award the year before he died. In part, he was honored for his “vivid and affectionate portraits of our country” and for portraying “the American scene with unrivaled freshness and clarity,” with “insight, optimism and good humor.”

Even though some of Rockwell’s paintings have been removed from the White House, he is still of America’s most famous and beloved artists.

Prev Dolley Madison: A Model for Our Times – Quiz
Next Norman Rockwell Pictures Removed from the White House – Quiz