Why Should We Go to Mars?

Mars could be the first step to the stars.

In 2018, Musk’s company SpaceX dazzled the world by sending a Tesla electric car to space. Two years later, he continued to impress by sending humans into orbit. This is only the beginning.
SpaceX plans to go to Mars in less than ten years. Musk has said that he wants to establish a city on Mars as early as 2050.

That sounds fun, but living on Mars will be difficult. The gravity on the red planet is only 1/3 of the gravity on Earth. That means that if you weigh 100 pounds on Earth, you will weigh only 38 pounds on Mars.
Our bodies are not made for such a low weight. People who live there could experience bone and muscle loss. They could also get sick.
There is no air on Mars, and you could, therefore, never go outside without a spacesuit. If you think that social distancing during the Coronavirus pandemic has been tough, imagine how hard it would be to live on Mars. There will be almost no people, it will be hard to go outside, and there will be little to do. 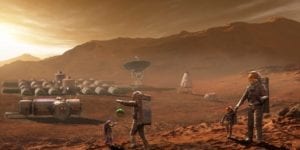 Why go to Mars, anyway? Earth is not entirely safe. Every 10,000 years or so, Earth is hit by a giant meteor. Depending on where it hits, it could kill millions. If it hits Antarctica, it could melt enough water to flood 90% of all large cities in the world.
If we can live on other planets, we have a better chance of surviving as a species. Mastering space may even help us prevent meteor strikes.

Settling Mars isn’t really the end goal. Elon Musk has said that SpaceX will first go to the Moon and build a base there before traveling to Mars. The point of going to the Moon is practice and to establish an excellent place at which to launch rockets.
In the same way, Mars is also just practice. If we can master the colonization of Mars, we are better prepared to leave our solar system and visit other stars.

In the last 30 years, scientists have discovered that the universe is full of stars with planets. Those planets outside our solar system are called exoplanets. Some of these planets resemble Earth, and the closest ones are only about five lightyears away. A lightyear is the distance that light travels in one year.
One day in the future, we might be able to build spaceships that can travel near the speed of light. Then it would be possible for humans to go to other stars and the planets that orbit them.
This could happen a lot faster than most people imagine. If you are young today, you could live to see the first mission to another star. You could even be one of the first people to set foot on an alien planet. Who knows, maybe we will even find alien life?