There wasn’t a clear winner in two Georgia elections for the U.S. Senate. But after the November 3 election, Democratic Party officials realized that 21% of the votes came from people who were between 18 and 29 years old. According to the Center for Information and Research on Civic Learning and Engagement (CIRCLE) 17% of those casting a ballot nationwide in 2020 were between 18 and 29 years old.

National Democratic organizers are hoping to convince young voters to get back out on January 5 and give the two Senate seats to the Democrats. Hollywood types, social media influencers, and organized student groups are hosting Zoom calls and getting their message out digitally. This includes both Democrats and Republicans. College Republicans are phone banking, holding remote rallies on-line, and challenged their ranks to do the same with a “National Call Competition.” So far, 300 plus College Republicans are actively involved.

Christmas morning in Nashville, TN, began with a warning: “Evacuate now. There is a bomb. A bomb is in this vehicle and will explode.” Before the warning, the song “Downtown” had been playing. Soon after, a computerized voice started a 15-minute countdown. The police evacuated the area so that no one was hurt in the explosion.

There is a lot left that we don’t know about this event. Was it an act of terrorism? Terrorists usually want to hurt people, and this bomber made sure everyone had time to evacuate. Also, terrorists usually take credit for their work. This hasn’t happened yet, unless the FBI and ATF just aren’t telling anyone yet.

Trump: 2020 Most Admired Man in America

The 74th annual Gallup poll closing out the year in review shows President Trump to be the most admired man in America. Before 2020, Barack Obama had topped the list for 12 years. Since 1946, the incumbent president has won the title 60 times. 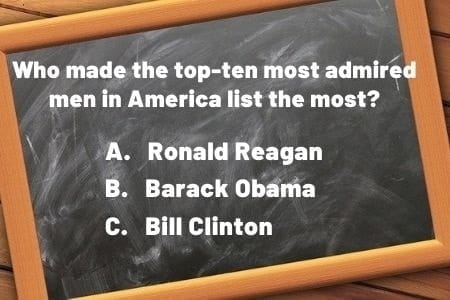 The most top-ten mentions over the years were received by Rev. Billy Graham, who passed away in 2018: He made this list 61 times during his life. Behind Graham are two former presidents, Ronald Regan with 31 top ten finishes and Jimmy Carter with 29.