The 19th Amendment: Women Get the Right to Vote

Women couldn’t vote in the United States until the 19th Amendment.

“Everybody counts in applying democracy” – those were the words of Carrie Chapman Catt in 1917.

Democracy lets people get together and vote on what should be done. But women didn’t always have the right to vote in the United States. Three years later, Catt would achieve a lifelong dream – winning the right to vote for women.

America is celebrating the 100th anniversary of the 19th Amendment to the U.S. Constitution. It says: “The right of citizens of the United States to vote shall not be denied or abridged by the United States or by any State on account of sex.”

After nearly 100 years of action, women were finally granted the right to vote in 1920. 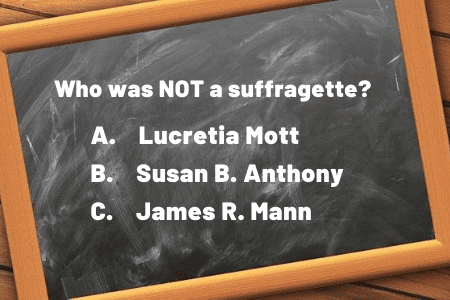 Suffragette Carrie Chapman Catt campaigned loudly and led an army of women in 1919 to pressure Congress. In May of 1919, Representative James R. Mann from Illinois argued that Congress should approve the Susan B. Anthony Amendment. This would change the Constitution so that people could vote no matter whether they were male or female. It passed the House of Representatives with 304 votes for, and only 89 against. It passed the Senate in June of 1919 with 56 votes for it and 25 against. Enough of the states then agreed, and the change was added to the Constitution as the 19th Amendment.

Ever since the 19th Amendment took effect, women have joined the men of the United States in voting to decide who leads the country.