Frozen puppy is a mystery to evolution.

It’s a bird, it’s a plane … or is it a puppy or a wolf?  That is the question scientists are asking after finding an 18,000-year-old frozen puppy. The fossil was found near Yakutsk, in eastern Siberia. Russian scientists discovered the pup and named it “Dogor,” which is a Yakutian world for “friend.”

This discovery is surprising because the puppy is from “a very interesting time in terms of wolf and dog evolution.” David Stanton, a researcher at the Centre for Palaeogenetics, said, “We don’t know exactly when dogs were domesticated, but it may have been from about that time. We are interested in whether it is in fact a dog or a wolf, or perhaps it’s something halfway between the two.” 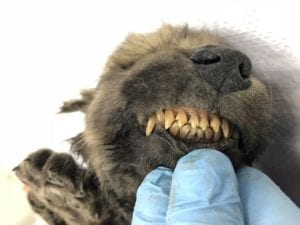 Dogor is a mystery to scientists because he isn’t from a time period when we think our ancestors played “fetch” with a pet dog. In fact, it is still uncertain how dogs became what they are today. Scientists think modern dogs were domesticated from wolves, but nobody knows when this happened.

According to Stanton, it is usually easy to tell the difference between dogs and wolves, but researchers are having a hard time in the case of Dogor. He said the puppy has traits of both dogs and wolves. This could mean “it’s from a population that was ancestral to both – to dogs and wolves,” he said.

Dogor raises lots of questions about the time of our ancestors. Did ancient humans have a dog as man’s best friend? Was Dogor a mix-breed of wolf and dog, offering ancient man help with the dangers of daily life? Perhaps we will find out as scientists unravel the mystery.