Is Toxic Media to Blame for the Political Divide?

Americans no longer trust journalists to give them the news without bias.

The number-crunching pollsters at Gallup are saying 86% of respondents to a recent “American Views” survey believe the media is biased. Respondents saw only a fraction of bias in their own favorite news agencies, yet 69% felt other outlets were extremely biased. The study also tells us the press is in a downward spiral in public opinion.

During the Obama and Trump presidencies, Americans’ perceptions of bias in the way news stories are delivered increased by 25%. Who hasn’t heard the increasingly cacophonous chants of “Fake News,” the clever twist on words “Faux News” instead of Fox News, and “CNN Sucks”?

The Knight Foundation – a non-profit that seeks to promote quality journalism – is the underwriter of the “American Views” report, a months-long study with well over 20,000 respondents. And a shout out to the foundation for its approach: Each household mailed a survey found a crisp one-dollar bill as an incentive with a pre-paid postage return envelope. Genius.

The group studied the information and concluded:

“Americans’ views on the media have been negative for quite some time but have become slightly more so over the past few years. Americans perceive more — often political — bias in the news media and suspect it intentionally pushes a particular perspective. With a highly fragmented news ecosystem, the public faces real challenges sorting out what is ‘real’ from ‘fake news.’”

The Great Fake Out

Americans – self-identifying as Republicans, Democrats, and Independents – firmly believe the media is attempting to hoodwink the electorate. An alarming 74% think media conglomerate owners sit in hush-hush meetings and decide how to cover the news. Another 54% are certain that inaccuracies are purposely reported, and 28% flat out say that reporters make up stories to get ratings and follow a personal bias.

That gives Knight Foundation Senior Vice President Sam Gill a case of the chills: “Most Americans have lost confidence in the media to deliver the news objectively. This is corrosive for our democracy.” 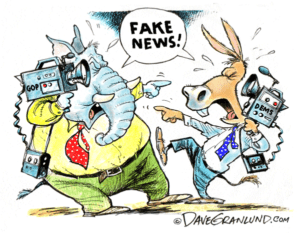 The saving grace found in the survey results is the sheer fact that Americans believe journalism and media are vital to a free society. They also understand the role of providing accurate news coverage and that holding those in power accountable for their actions is their utmost responsibility.

America is watching and waiting to see how the news media reacts to this information. Will the people put well-deserved faith back into the deliverers of the daily news – or power off for good?