Crisis at the Border: Is a Wall the Answer?

Facts on the border wall.

After months of debate on immigration policy and whether a border wall is an effective tool or a symbolic expense, Americans agree there is an immigration crisis at the US/Mexico border.  What is still being argued is how to solve the situation.

Proponents of tighter security, who call for a solid barrier to stem the flow of illegal migration, want to funnel immigrants through legal ports of entry where they can be identified and recorded as seeking asylum.  Along the 1,933 miles of Mexico and US border, 700 miles have fencing or barriers in place and there are 136 legal ports of entry asylum seekers can use.

Opponents of the building of a border wall call it cruel and believe that our borders should be open to anyone who wants to come to America.  Calling the situation a humanitarian crisis, many leaders in large US cities – San Francisco, New York, Chicago – have declared their cities to be “sanctuary cities,” which pledge to not send back any illegal aliens, and offer them health and welfare services instead.

Many argue that our own citizens – our homeless population, elderly, and veterans – should be a priority over any non-citizen.  But opponents of the border wall focus their concerns and efforts on the overcrowding of detention centers and the separation of families once the immigrants are caught.

There have been numerous reports – some factual and others proven to be invalid – that immigrants are treated poorly – and some have died from illnesses contracted prior to entering the US.  One recent tragic case is that of an El Salvadoran father and daughter who drowned attempting to cross the Rio Grande river into the US illegally.  As humanitarian crises go, the loss of life regardless of cause is something that lawmakers and community leaders find a way to address.

Opponents also believe the expense of a barrier is too high.

Actual estimates vary – depending on size and reach of the wall.  To secure the entire expanse of the southern border could cost up to $25 billion.  However, a recent half-mile expanse completed in Dona Ana County, NM, cost $8 million and was paid for through private funding raised by citizens through a crowd share platform.  It was also completed in a matter of days. 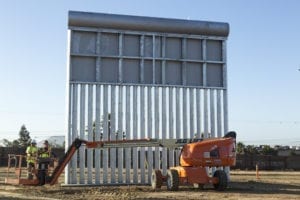 To compare, is $25 billion wall to help stop the influx of immigrants virtually unchecked going to save taxpayers money?

A recent report from the Heritage Foundation states that “the average unlawful immigrant household received around $24,721 in government benefits.” With a prediction of one million illegal immigrants by the end of 2019 — with an estimated cost of $69,570 over his or her total time in the US – that comes up to about $69.6 billion spent on non-citizens.

America is a nation of law and order. Illegal drugs, human trafficking, and gang violence is a threat to all US citizens and legal residents – and to immigrants attempting to cross by avoiding ports of entry.  Every country around the world has its own laws, customs, and religions with clear boundaries.  Once a person leaves one nation and crosses into another, that person must adhere to the law of the land.  It is no different in the United States.  Americans are protected by the government.

Is it un-American to build a wall to stop illegal immigration? Some believe that, as a nation of immigrants, we must open our borders to others.  But no American is allowed to enter another country without first going through a port of entry and declaring and proving citizenship with papers or passports. The people who want tougher national security are of the belief a wall or barrier will deter others from attempting the trip, will tamp down on smuggling, and will reduce the flow of illegal drugs entering America.

This is a discussion all Americans must have.