Could There Be an America Without the Age of Reason?

The American Founding Fathers were inspired by the ideals of the Age of Enlightenment.

The ideas of justice, freedom, and prosperity that come to mind when we talk about the Western world – especially America – are products of the Age of Enlightenment, also called the Age of Reason. This was an intellectual movement in the 17th and 18th centuries that eventually led to the American Revolution.

The Age of Enlightenment: A Primer

In 1637, French philosopher Rene Descartes wrote “I think, therefore I am” in his book Discourse on Method. The idea is that his existence cannot be doubted since he is the individual doubting in the first place. This simple concept began the Enlightenment as it gave people the idea that everyone exists in this world because they possess the ability to think. With this truth, people understood that they have independent thought, they should not believe everything they are told, and they can question everything.

The thinkers of the time, from Francois Voltaire to Immanuel Kant to John Locke, put forward the core principles of Enlightenment: individual liberty, the separation of church and state, religious tolerance, progress, and constitutional government. These should sound very familiar to Americans. 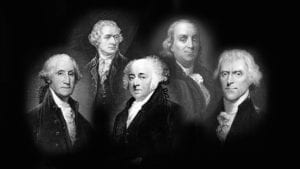 The Founding Fathers understood the power behind Enlightenment. The attributes in the Age of Reason are written into the founding documents of this nation and its states. The Virginia Declaration of Rights says:

“That all men are by nature equally free and independent, and have certain inherent rights … namely, the enjoyment of life and liberty, with the means of acquiring and possessing property, and pursuing and obtaining happiness and safety.”

The Declaration of Independence says:

“We hold these Truths to be self-evident, that all Men are created equal, that they are endowed by their Creator with certain unalienable Rights, that among these are Life, Liberty and the pursuit of Happiness.”

Who were the leaders of the American Enlightenment? Here are a few good men:

Do the Ideas of Enlightenment Still Apply?

There wouldn’t be a United States without the Age of Enlightenment inspiring the Founders. But the world has moved on and now follows ideas much more like those from before Enlightenment. The government should rule everything, not the people. Science and free speech are not as important as being politically correct. These ideas are the exact opposite of what Enlightenment gave us. But can the American spirit overcome these old and dangerous ideas?